Ahmed Deedat - A Glimpse From a Great Man's Life 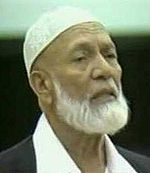 I remember I was kid & I saw Ahmed Deedat in that debate on TV, I think it was the one with Jimmy Swaggart called "Is the Bible God's Word?". I do not remember much from what was said in it, but I recall it was a subject of conversation in my family, to them Deedat was for sure the winner.

But as my country is not English speaking (not even as a 2nd language), I do not think much here know Ahmad Deedat apart from that debate broadcasted (translated to Arabic) once or twice on TV; even I had not known that much up until this Ramadan. I cannot tell you his biography, but from some speeches & debates I watched, I knew more about his ideas & works. In this post I want to clear a few misunderstandings about this great man, & pay homage to him in his death.

You would quickly notice Deedat's humble manners & sense of humor; in the same time he was very precise in his statements & wasn't afraid to call things by their names, that's why some Christians & Jews may describe him as a hater, but often it's because they do not get his point or because he is quoted out of contest. Let me give some examples.

• When he says the Bible is not the word of God, some may think he denies flatly the Christian faith by that; but if you read or listen to Deedat more, you will notice that he has clear belief in Jesus as a prophet & in the word of God revealed to him. He says (truly) that Islam is the only religion that recognizes Jesus as a Prophet that was miraculously born (even some Christians deny this) & that a Muslim cannot be a Muslim without accepting that. Deedat did not deny the word of God was in the Bible, he denied that the whole Bible was the word of God & showed evidence.

• When he talked about Jesus genealogy in the Bible, he said that in two claimed trees, God does not appear in Jesus fathers list, which would mean the Christ was a bastard. Deedat didn't call Jesus a bastard, but the Bible itself implicitly did; how can Jesus be a son of God & in the same time have two different contradictory genealogy trees that both are deprived of God's name?! Deedat's point was to prove the corruption in the Bible. Again - like any Muslim - Deedat believes in the miraculous birth of Jesus, he was created in Mary's womb - just like Adam - with no need to a father, he cannot be a bastard!

• Some may also be shocked by some of Deedat's statements on the Jews, this because many people are confused, they mix up anti-Zionism & anti-Semitism. If you watch his talk in East meets West (starting from 35:42), he says that Judaism is the closest religion in beliefs to Islam, & that the conflict between Palestinians & Israelis is more a territorial conflict than a religious one.

You may encounter some haters' videos in Youtube, precisely the ones showing Deedat in his sickness bed, they claim God punished him for his blasphemy against the Bible & Jesus. I want to say that Deedat's arguments were based on evidence & deep knowledge of the Christian religion; while the claims of those people are based on an old man's physical condition & superstition. Deedat until the age of 78 was traveling the world with energy to deliver his message; in 1996 he had a cerebral vascular accident that left him paralyzed from the neck down; he couldn't move, talk or even swallow. All what he could do after a training in a Saudi Arabian hospital was to use his eyes to communicate through some apparel.

Prophet Muhammad said that if God loves a person, he tests him; in my opinion, Deedat passed brilliantly the test; even laying in bed he could deliver a message of faith & sense. He received many visitors in his room; among them admirers, but also Christian preachers who tried to convert him; he silenced them & gave them matter to ponder with just movements of eyes. In those nine years he lived paralyzed, instead of cursing God he counted God's blessings on him.

Sheikh Ahmed Hussein Deedat died August 8, 2005 at his home in Verulam, South Africa; his son Yusuf testified the last moments of his father’s life were peaceful (unlike what the haters say).

Among the believers are men who have been true to their covenant with Allah; of them some have fulfilled their obligations; and some of them are still waiting, but they have never changed in the least.


May God have mercy of him & make his tomb be one of heaven's gardens. May he join us with him in the best state of faith. Aamyn!
Politics amp; Religion