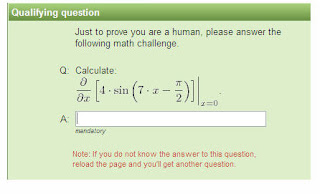 I thought the word "Turing" was an adjective, but when I looked in the dictionary, I didn't find it, this was some time ago but I didn't care till today.


A CAPTCHA (IPA: /?kæpt??/) is a type of challenge-response test used in computing to determine that the response is not generated by a computer. The process involves one computer (a server) asking a user to complete a simple test which the computer is able to generate and grade. Because other computers are unable to solve the CAPTCHA, any user entering a correct solution is presumed to be human. A common type of CAPTCHA requires that the user type the letters of a distorted image, sometimes with the addition of an obscured sequence of letters or digits that appears on the screen.


The Turing test is a proposal for a test of a machine's capability to demonstrate intelligence. Described by Alan Turing in the 1950 paper "Computing Machinery and Intelligence," it proceeds as follows: a human judge engages in a natural language conversation with one human and one machine, each of which try to appear human; if the judge cannot reliably tell which is which, then the machine is said to pass the test. In order to test the machine's intelligence rather than its ability to render words into audio, the conversation is limited to a text-only channel such as a computer keyboard and screen (Turing originally suggested a teletype machine, one of the few text-only communication systems available in 1950).


I guess everyone who used Internet was driven to solve CAPTCHAs, the first one I solved was to open my first e-Mail account, then I can't count the ones I solved since that, to register on various sites, post comments on blogs, etc.

CAPTCHAs or Turing Numbers, are not Turing Tests in the classic form, Turing tests are tests made by a human to machines & to humans to test the accuracy of machines; CAPTCHAs are tests from machines to humans & to machines, designed (the tests) to not be solvable by machines. That's why according to my encyclopedia that just rocks, CAPTCHA is called sometimes a Reverse Turing Test.