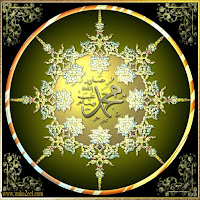 I'm writing this because yesterday we celebrated the B. Day of our prophet & today in the Joumoua (Friday afternoon prayer), the imam talked about how Mohamed had great ethic & how now we, today's Muslims follow nothing of them. The second reason is a video I watched a few days earlier called "Algeria Vs Europe".

The video shows in a humorous & exaggerated way how far we are from civilization, but in the same time it's an example of how we see the ideal in the west & forget that we have better ideals in our own culture; worse, what we apply from the western "ideals" are only the easy libertine & sexual behaviors which are far from being ethical in our culture.

So when the world then critics, insults Islam & sometimes sees Evil in it, it's mainly because of us Muslims, we are the mirror of Islam, non Muslims see our religion through us & we are not reflecting the image we should do; it's probably because even we have a lack of understanding of Islam, we tried to be modern & thought modernity means to replace ALL our (outdated) values with new ones, in the process we are losing our souls ... maybe also some of those who tried to get back to the origins did it in a awkward manner ...

OK, enough, have a laugh with the video now :D