The House of Representatives & the Senate Form the U.S. Congress 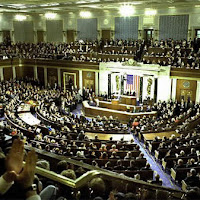 This maybe basic information for the U.S. citizen & other more aware of politics news than me, but I have to admit that I never looked closely into this, I always heard about the Congress, the Senate & Senators a bit about the House of Representatives, but only today I managed to link all that rather correctly ..

So to summarize, there's,

The Congress: the bicameral legislature of the federal U.S. government, which is composed of two houses or chambers:

The House of Representatives: a popular chamber in which all states are represented proportional to their population (with at least one Representative); each representative serves for a two-year term. The house is presided by the "Speaker" who's is elected by the members.

The Senate: Also called the upper house (the lower house being the House of Representatives), each state is represented in it by two Senators for a total membership of 100. Senators serve six-year terms & there are elections every two years to renew the third of the seats.


The bicameral Congress arose from the desire of the Founders to create a House "of the people" that would represent public opinion, balanced by a more deliberative Senate which would represent the governments of the individual states, and would be less susceptible to variations of mass sentiment.