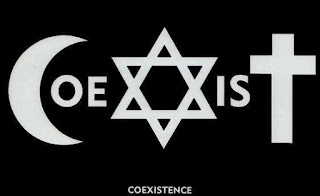 The article is divided on three parts:

The first one titled God, compares "The Trinity" concept in Christianity (the claim that God is made up of God the Father, God the Son, and God the Holy Spirit) with the monotheism in Judaism, which is also found in Islam. Christianity also comes with a concept of Evil that has an ability to create equal to God's, which is rejected by both Jews & Muslims:

Second part titled The Jewish view of Jesus, Jesus is Son of God & part of the Trinity (God incarnate & in the flesh) according to Christians, he came to Earth to absorb the sins of humans & save their souls.

To Jews, Jesus is an ordinary human who can't save humans souls, that's something only God can, he's not the son of God; this is the same Islamic point of view, except: 1) that Jews believe all humans are children of God, which is denied by Muslims, & 2) that Muslims believe Jesus was a prophet sent by God just like Mohamed, which the Jew deny.

Muslims & Jews also agree on this:

Third part is named Free will & original sin, the notion of original sin for Christians states "that people are bad from birth and cannot remove sin by themselves but need an act of grace provided by the sacrificial death of Jesus as atonement for all of humanity's sins"; just like Islam, Judaism go against this idea stating that humans have the free moral will to choose to be good or bad & are not born naturally bad (or good).

Fourth & final part is named Death, Heaven, & Hell, this is a less interesting part than the other ones above in my opinion, according to the article, Jewish thinkers didn't focus much on the after life but on life on Earth and how to improve this world, there are few rare descriptions of life after death; however some thinkers see that the afterlife will reflect the ultimate justice of God opposed to the seeming injustice on Earth.

I don't know a lot about Heaven & Hell in Christianity, but I know in Islam they were described in many occasions in Quran & Sunna.

Is seems also that many Jewish thinkers noted that since, essentially, God is filled with mercy and love, punishment (for sins, after death) is not to be considered to be eternal.

Again I don't know about Christianity, but Muslims believe the worst enemies of God (starting from Satan) would stay in hell forever.
Politics amp; Religion